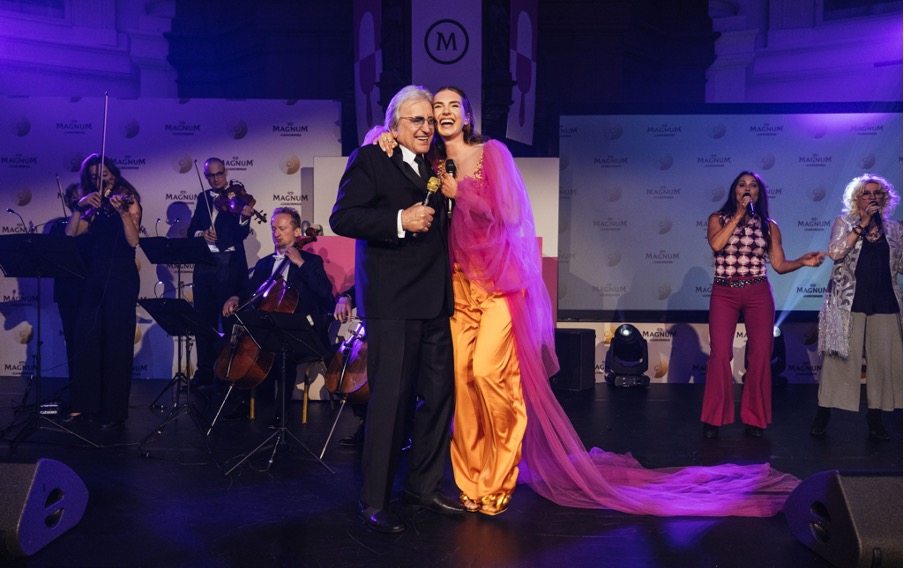 The person who said not to touch the classics obviously hasn’t met Magnum yet. This year, the ice cream brand introduced a new sensation based on the classic Magnum Almond: the Magnum Almond Remix. The classic ice cream stick was revamped and is now coated with white chocolate and half-dipped in milk chocolate. The international Classics Remixed campaign was translated to a local level, with the iconic Magnum experience–albeit a little different. The theme of the evening was Remixed and we took that seriously. We remixed everything; the classic venue got a hip pop art-decor; the traditional drinks and bites were amped up and we played a varied range of music styles. The highlight came in the form of a surprising remix of I Can See Clearly Now by Lee Towers, who was joined by Maan and the Koninklijk Concertgebouworkest (the Royal Concertgebouw Orchestra). Of course, the cream of the crop of Dutch influencers and media personalities attended the event.

The campaign focused on the Magnum Almond Remix, but other classics were dragged into modern times with a remix as well. Music was the strategic foundation, while the setting was true to people’s expectations of Magnum campaigns; a unique experience with the well-known ‘playful and pleasure for everyone’ motto. Glasnost was invited to underpin the new product and the campaign, while increasing Magnum’s brand power in three different ways:

The concept, the message and the execution of the campaign were primarily framed by Magnum’s purpose and brand. The campaign for the Magnum Almond Remix revolved around the idea of turning a classic into something new; in this case a revamped Magnum Almond in a double layer of cracking chocolate. The campaign became locally relevant by the chosen strategic framing with music, which was presented in such a way that it brought people together. All this in Magnum-style, full of ‘playfulness and pleasure for everyone’.  Various target audiences (young and older) came together through the entertainment at the Magnum Pleasure Residence. We made the ‘Classics can be remixed’-theme come to life through a show featuring a remixed version of I can see clearly now. The event was a catalyst for earned attention for both the product and the campaign message.

We set three different timings for the campaign, coupled with moments of relevance. These key timings came prior to the event (save-the-date; physical invite; embargoed pitch); during the event (content opportunities at the location; entertainment elements during the event; possibility for interviews; the live presentation of the I can see clearly now-remix) and after the event

The mixture of PR tactics resulted in a reach of 88 million, with a subsequent PR value of € 2,8 million.