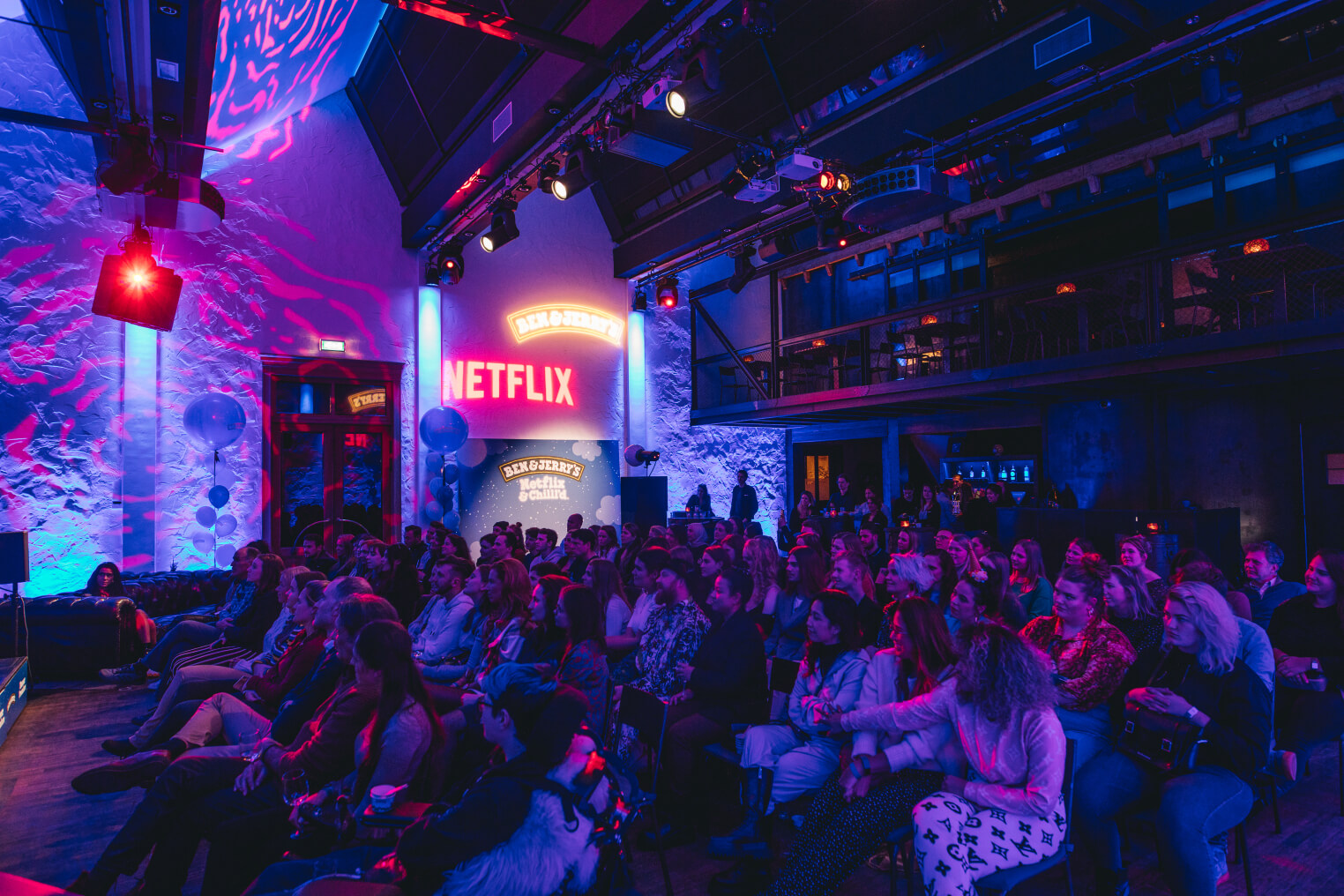 Ben & Jerry’s is joining forces with Netflix to give you the best of both worlds: a brand new ice cream flavour called Netflix & Chilll’d. This ice cream is the sweet and salty lovechild of two brands that are synonymous with a relaxed night in. Ben & Jerry’s asked Glasnost to put the spotlight on the Dutch launch of the new flavour as well as on the collaboration between these two giants. Watch the aftermovie here.

When you say Ben & Jerry’s, you say humorous fun. The collaboration between the ice cream brand and Netflix was a worldwide first and would be broadcast to the world with a bang. This milestone was to be announced in the United States during the so-called Flavour Premiere. The fact that this event was to take place a day before the rest of the world was notified, made for a special challenge. In view of the possibility that word of the collaboration (the Message in the Glasnost 3-M model) would get out ahead of the Dutch reveal, Glasnost opted to generate plenty of buzz regardless. They did this by emphasizing the Moment (also part of the Glasnost 3-M model) and offering media, influencers and consumers an experience centring on the two iconic brands.

The trick was to get influencers, media and consumers excited about an event revolving around the Ben & Jerry’s – Netflix collaboration without being able to mention the specifics. After all, the partnership was still a big secret. It became apparent that the Flavour Premiere simply had to be an unforgettable evening. The humorous fun that is inherent to Ben & Jerry’s could only be done justice by an evening of roaring laughter. As Netflix is brimming with standup comedy, Ben & Jerry’s decided to unite the characteristic elements of both companies at the Tobacco Theatre in Amsterdam. This was the perfect location for standup comedy and a wonderful setting for a proper premiere night. A red-carpet welcome would lead to an evening programme filled with comedy, the big reveal and other surprising elements of fun. Guests were allowed to bring a friend because fun is funner when you share it–and eat loads of ice cream doing it.

Glasnost advised Ben & Jerry’s to focus on influencers in order to make a wider audience aware of the new flavour. This was done by delivering Netflix & Chilll’d care packages to micro and macro influencers, even those who couldn’t make it to the Flavour Premiere.

The Tobacco Theatre was transformed into the perfect stage for the big reveal through a red carpet atmosphere and playful decoration–paired with a down-to-earth, Dutch Ben & Jerry’s wink. The Flavour Premiere was hosted by Moise Trustfull, who visited the Ben & Jerry factory in Vermont last summer. We found the perfect main act in Soundos El Ahmadi, one of three Dutch comedians with their own Netflix special. Invites for the event were sent out to influencers such as Amije van der Laan, Lily Tjon en Bradley Braafhart, as well as various media outlets such as CosmoGirl!, Girlscene and Culy. On the Ben & Jerry’s social media channels news about a raffle to win entry tickets was put out to fans.

The Flavour Premiere theme was expressed in numerous ways, such as a red carpet photo booth, a cocktail corner with CHILLL’Dtini cocktails containing the same ingredients as the new ice cream and a chilll’d corner where the Ben & Jerry’s story was brought to life. Media response to the event was impressive and ran from social media posts during the evening itself to reviews and messages about the new flavour. To conclude the launch of the new ice cream, Netflix & Chilll’d was handed out at editorial offices of selected Lifestyle and Food media as well as to various influencers, receiving a warm welcome from all. 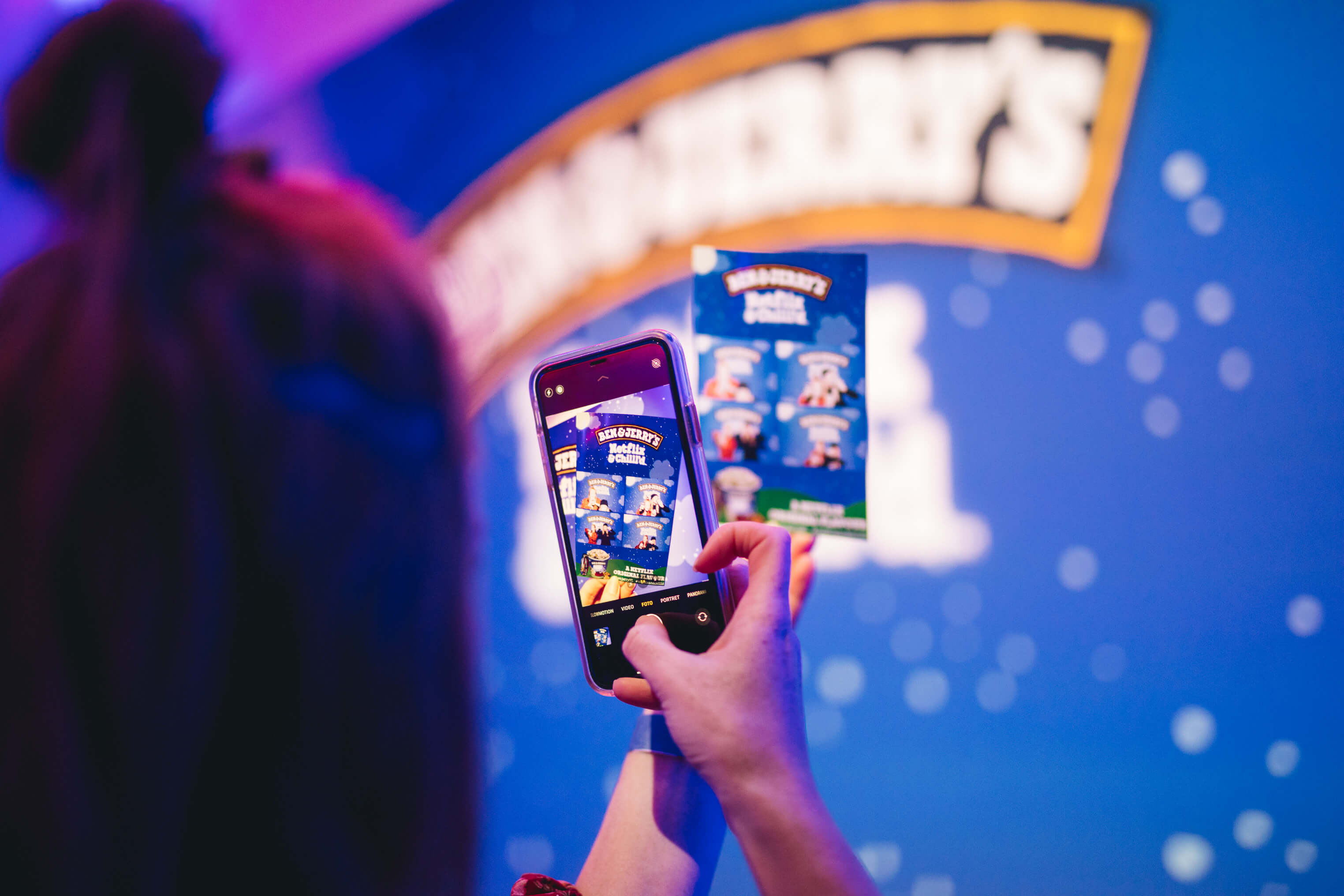 The new flavour made a grand entrance on the ice cream stage and the news was duly reported on Libelle, Girlscene, Glamour, Grazia and Amayzine. Food media outlets such as Culy, FavorFlav and Distrifood also talked about the collaboration between the two companies. Many influencers, such as Lotte van Eijk (44,400 followers), Marco Dreijer (12,000 followers) and Samya Hafsaoui already published posts on their social media channels during the Flavour Premiere event. A media value of € 599,275 was realized with a cumulative reach in excess of 15 million.